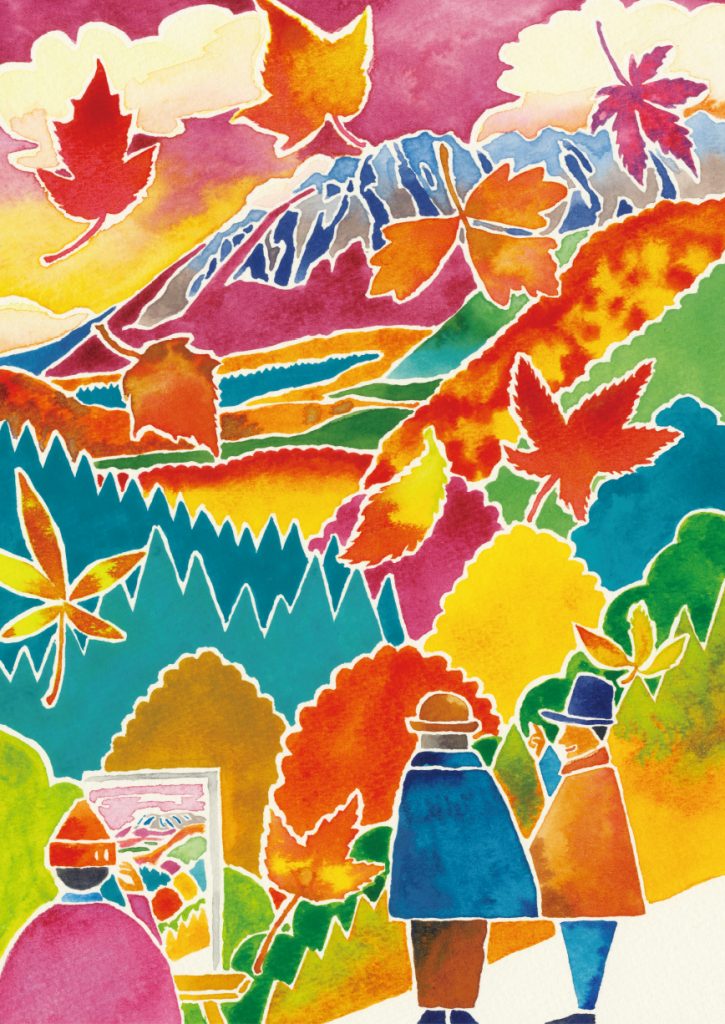 The “Kagikaketoge pass” that provides a panoramic view of the southern wall of Daisen. This is one of the prominent grand views in the Daisen area, at an altitude of 910 meters in Kofucho, Shimane. It is one of the most popular tourist areas in Daisen, charming large numbers of people with the crisp red and yellow beech forests in fall and the contrast between the fresh new green and wild mountain surface in early summer.

When I first heard about the “Kagikaketoge pass”, I wondered “what does Kagikaketoge mean?” Does that mean that it is locked (kagikake)? Certainly in winter the paths to nearby areas get blocked, I surmised. On this occasion, I talked to Mitsuru Sasaki, Chairman of the “Oku Daisen Old Path Preservation Council”. 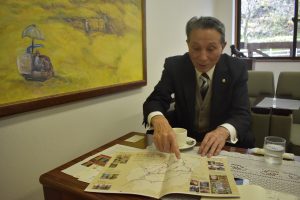 The name “Kagigaketoke” itself is a name actually given to several places around the country. The one in the Daisen area is on the prefectural boundary between Hiroshima and Shimane and is the “Kagikakedoke” close to Mt. Dogo. It seems you read this as “Kakkeke” rather than “Kagikake”, but the meaning is the same. At this place called Kagikake, travelers pray for the safety of their journey by breaking the branch off of a tree and throwing it in the air. If that branch gets stuck in a tree, then the safety of their journey is assured, so it is like a Buddhist prayer. Have you ever seen a stone on top of a Torii gate at a shrine? The worshipers throw a rock to make one’s wish come true. If the rock stays on the gate, the prayer will be answered. It is the same thing as this.” I signal my understanding and state that I did this a lot when I was a child.

“In particular, at this kind of pass, travelers feel anxious. This is a mountain road without cars or electricity, and you never meet anyone. So the travelers will throw a branch and pray for safety. Will I reach there safely? Will I get home safely? They were assaulted by an anxiety that modern people could not even imagine”.

Kagikaketoge in Daisencho was a stopover for the “Oku Daisen old path” visited by worshippers coming from all areas to Daisenji Temple, as Daisen flourished since olden times as “faith mountain”. Additionally, this mountain, from long ago, was a path linking the Mimasakanokuni Province in Sanyo and the Hokinokuni Province. From Utsumidawa to Sagarikaya, then Mitsukue, Kagikaketoge, then passing through one of the side roads to the Daisen old path, it merged into the highway leading to Daisenji Temple.

Emperor Godaigo after failing in his plan for the Kamakura Bakufu, and being forced into Okinoshima Island, was said to have passed through Kagikaketoge and thrown a staff into the branches of a tree, and prayed for restoration. The travelers that travelled through the pass when visiting Daisenji as well were said to have prayed not only for the safety of their journey but that the horses and cattle they would proffer for the markets would be sold for a high price.
“In addition to these, this is a place where many different people have prayed for many different things. Daisenji was a mountain for which women were forbidden, so this was a place where people came to Kagikaketoge to worship the mountain. Additionally, this was not an environment like now where anybody could simply travel to Daisenji, and so it also became a place to worship the souls of the people who had died in this place. There is also the fact that this beautiful scenery has remained unchanged since long ago, so probably many people have come here for a kind of recuperation for the eyes”, Sasaki laughs.

This is the ““Oku Daisen Old Path Preservation Council” where Sasaki-san serves as Chairman. In fact, these Oku Daisen old paths did not, for many years, see the passing of humans and were a disused mass of vegetation. Apparently, this old path “was revitalized through the efforts of multiple volunteers, to create the 4km stretch from Mizukue to Shimokaya”. Then as more and more people learned of the “Oku Daisen old path walk” sponsored by the Council in fall of every year, it became a popular event. Many participants visit from both within and beyond the Prefecture.

“Passing through Kagikake from Mizukue, you walk along the sightseeing spot known as the Oku Daisen old path. This is full of enjoyment not limited to walking, including tastes connected to Emperor Godaigo and “Kagura” Shinto music. I want this is an opportunity for many people not only to visit Kagikaketoge of course but also to learn about its amazing history.”

You can see the beautiful vision of Oku Daisen and Kagikaketoge that charm many people both now, and have done so since long ago.