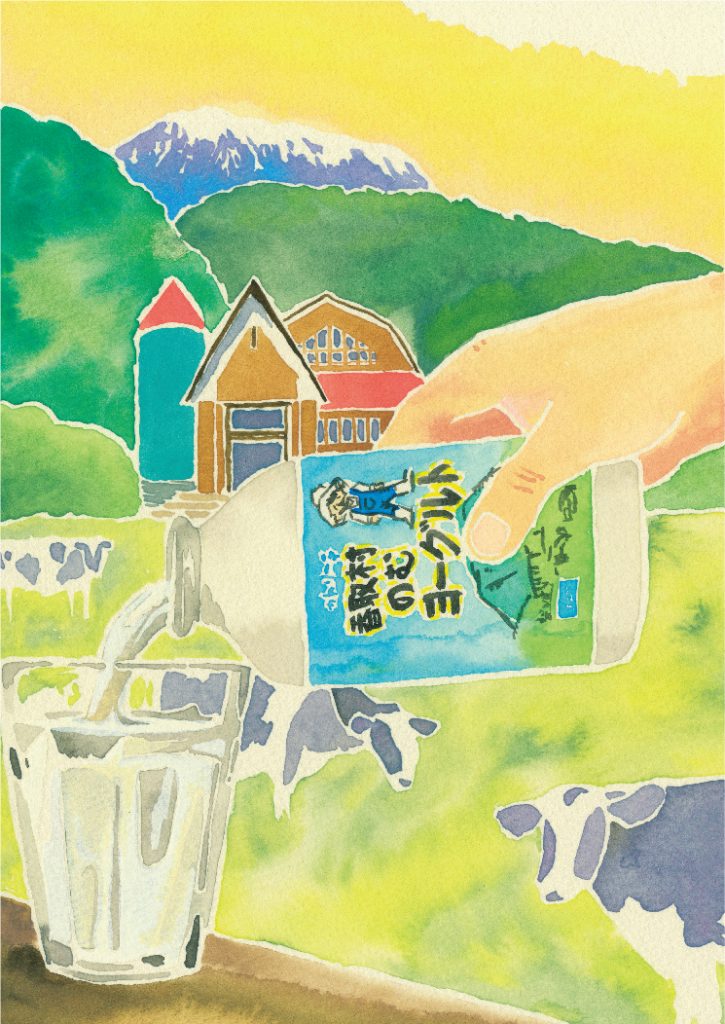 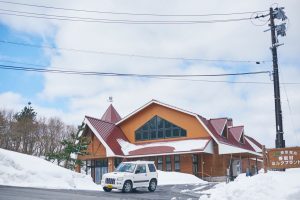 I visited on a winter’s day. There was still a lot of snow on the ground in Katori.

This “Katori Village Milk Plant” makes “Katori Village Drinking Yogurt” from cows raised in Katori. Utilizing fresh milk from dairy cows raised on the pastures at the base of Mt. Daisen, the yogurt is non-homogenized and does not use any thickening agents or stabilizers, allowing for a delicious, safe and natural yogurt.

At an elevation of 350 to 1000 meters, Katori Village was originally a pioneering group settlement of about 100 households. Most of the settlers came from Kagawa Prefecture around 1946, and the “Ka” from Kagawa and the “Tori” from Tottori were combined to create the name Katori Village. Historically, the settlers ran the “Katori Pioneers Group”, but now it is a large scale dairy farming co-op called the “Katori Pioneering Dairy Farmers Co-op”. 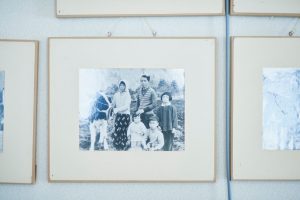 There are photos on on display in the shop next to the factory that allow you to get a sense of Katori’s history.

Mr. Sakata, the first generation manager of the milk plant, says that they were facing a decrease in milk consumption, and were thinking of ways to encourage people to enjoy more delicious milk, when they came up with the idea to make drinking yogurt.

Nowadays, yogurt and cheeses are common milk products in Japan, but at the time they were not popular. Despite this, the Katori Village Milk Plant began making these milk products from 1987. Today, “Katori Village Drinking Yogurt” plays an essential role not only as a popular souvenir from Daisen, but as a local specialty and a part of the everyday lives of the locals.

There are only four people who work at the big yogurt manufacturing plant. With just four people, they manage to make around 1000 bottles of drinking yogurt per day. We spoke with the current plant manager, Mr. Miyoshi. 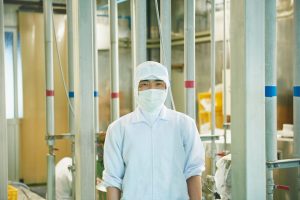 Mr. Miyoshi has been making yogurt for 24 years. His parents were involved in dairy farming, and he was surrounded by dairy from a young age. “Our drinking yogurt is just delicious. I can say that with confidence.” He says that the secret to the deliciousness is in the fact that they only use fresh raw milk.

They take milk from dairy cows that were born and raised in the expansive nature of Daisen, and make it into yogurt the same day. One of the secrets to making fresh yogurt is ensuring that not much time is taken from milking to production. Making yogurt in Katori using milk from cows raised in Katori – One of the reasons for the delicious flavor is the fact that not much time is taken before it is made.

The next secret to the delicious flavor is the fact that it is non-homogenized. You sometimes hear “non-homogenized”, but what does it actually mean? “Fresh milk contains chunks of fat. These chunks of fat are uneven and separate easily, making the milk difficult to sell. Homogenization makes these chunks even for a fine milk, but this process results also in the loss of the aroma and flavor of fresh milk.” This drinking yogurt is made without homogenization, and with prolonged low temperature fermentation to create a naturally delicious yogurt.

When I say that this drinking yogurt must have a completely different flavor to the ones you can buy at the supermarket, he replies with “Exactly. That is the result of the non-homogenization and prolonged low temperature fermentation.” If you pour the yogurt into a cup, you can see the unique consistency. The fat separates easily, so it is best to stir before drinking. The thick, satisfying consistency and rich flavor make for a delicious yogurt that envelops the tastebuds. 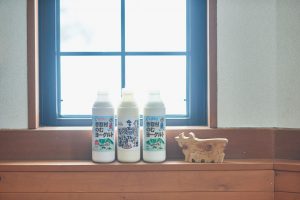 I had never tasted such a rich yogurt before.

At the Milk Plant, you can buy the yogurt yourself, but if you’re there at the right time, you can also see the manufacturing process. After taking a look, you can take a yogurt with you to the observation car park next door, and enjoy it while appreciating the view. Please experience this deliciousness at the foot of Mt. Daisen.

Here you can buy the product