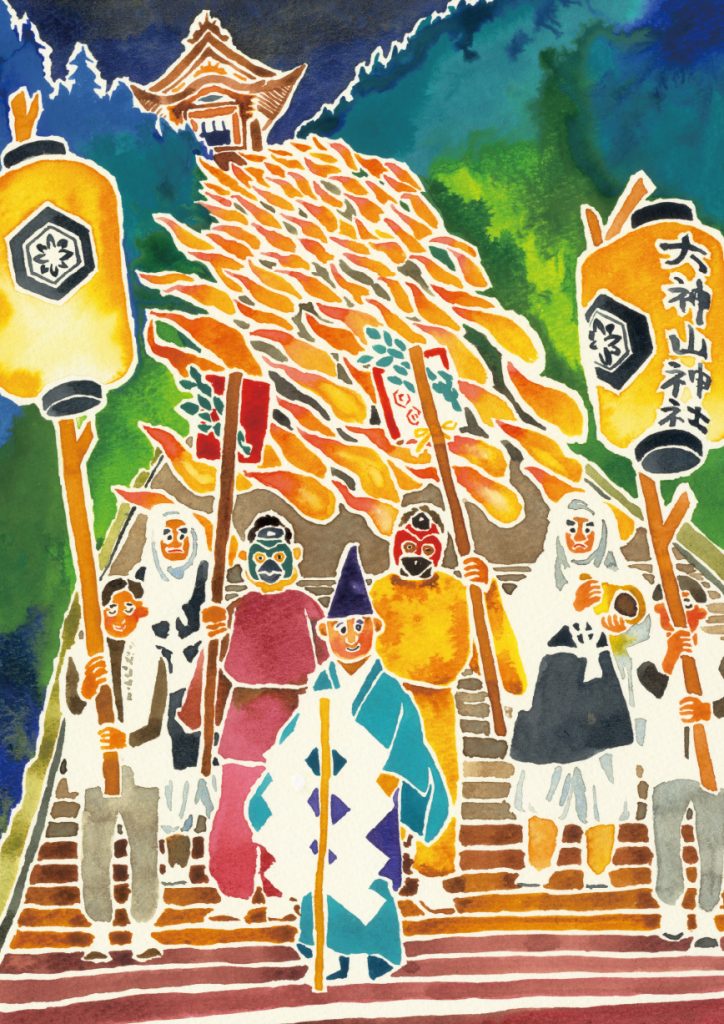 Daisen was formally known as “Hi-no-kamidake”, and the “Daisen summer mountain opening festival” is held in June every year to pray for the safety of the mountain. The “torch procession” is held as a festival for the previous night. There are approximately 200 torch flames buried in the pathway from the rear shrine of the Okami Shrine to Bakuroza. This vision is very saintly and solemn. Every year, it is visited both by locals and by tourists from around the country, and in recent years has become a popular event among tourists visiting from overseas. 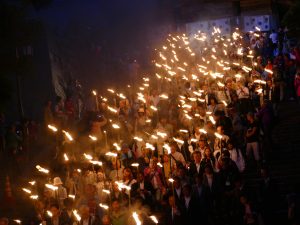 This torch procession, will be carried out for the 72nd time in 2018, since opening the mountain 1300 years ago. The lake with the torches buried in the path is a tradition that really marks the coming of the summer mountain season in Daisen. When we investigated the history of the torch procession, we could also learn about the history of mountain climbing of Daisen. The mountain clubs formed in each area before the war. With the winter mountain climbing and attachment of new routes for the north wall by mountain clubs from outside the prefecture, the desire to climb Daisen reached a crescendo after the war. After that, from around 1939 to 1940, there were not only tour-based mountain climbing routes, but previously unexplored routes were also developed, and it is said that exploration reached a peak in this period, from gorge climbing on the north wall, south wall, hell valley, and Kendani, to rock ridge climbing. This was the period during which the Daisen mountain routes were forged. As the war picked up in intensity after that, the mountain climbs followed the path of natural extinction. However, several of the mountain clubs were reformed after the war.

The mountain clubs formed after the war were active in terms of the important mission of the club, which had move from simply staking out new routes to protecting the nature of mountains through mountain climbing. These enlightening activities raised the interest of a lot of people in mountains and mountaineering in a different way to the mountain clubs before the war. Within the flow of 1947, the mountain opening festival was first held.

However, according to Chief Priest Takahashi of Okamiyama Shrine, contrary to the current mountain opening festival, it started with a mountaineering group of 7-8 people praying for the safety of the mountain at the rear shrine of the Okamiyama Shrine. What is completely different with the current mountain opening festival is that the night before the festival, the so-called “Bureiko”, involved all of the inns and eateries in Daisen offering limitless alcohol, and people used to drink through the night. 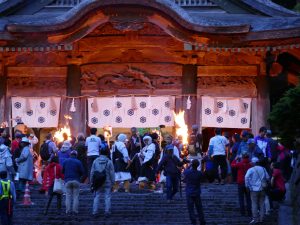 There are approximately 2000 participants today, and it has become one of the most popular events in Daisen. It is not only the people doing the procession, and the place is also teeming with spectators and photographers.
Yoshimi Morita, living in Daisencho, looks forward to the “torch procession” every year. As an amateur photographer, having used his camera for over 50 years, Morita is active both inside and outside the town. “I only started actually taking pictures of the torch procession these last several years. I was worried at first that it was a little self-indulgent, but when I went it was amazing. This torch procession is known as the lake of fire, and it is as its name suggests. Looking at it with the naked eye, it has a whimsical beauty, but it becomes even more whimsical when concentrated into a photograph.”

A photograph taken by Morita of the torch procession won an award at a photograph contest. “As the subject is good, I think that almost anybody could take a good photograph of it”, Morita says modestly, but it actually seems quite difficult. “I don’t have one myself, but my photographer friends tell me that you can take a great picture with just a smartphone”, he tells me. To claim a good photograph spot for the day, “from the morning time I am hanging around the path”, says Morita. “As long as I am healthy, I want to keep photographing this.”, he says enthusiastically. 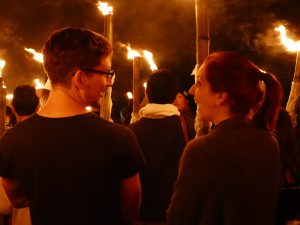 The river of fire flowing beyond time since the war. This is an event which lifts Daisen, praying for the safety of summer mountaineering, and is enjoyed by many people.