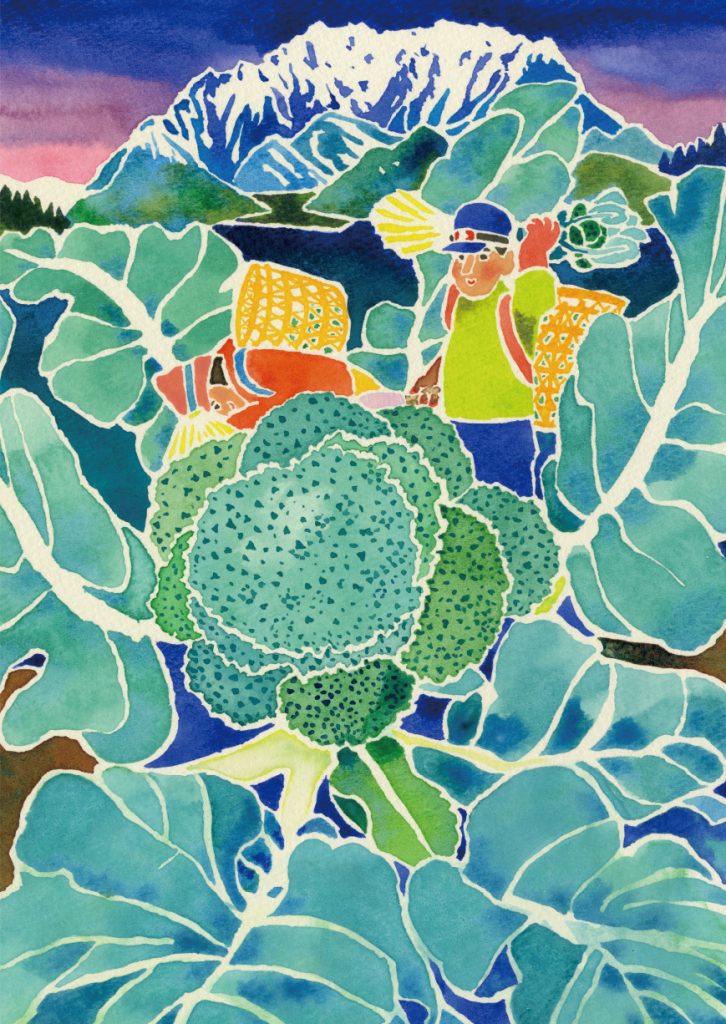 Broccoli is one of the specialty products of the Daisencho area. As one of the production areas in West Japan, in recent years, it has become known nationwide as the area for the brand of “Daisen Broccoli”. According to Tatsuo Takami, Chairperson of the JA Tottori Seibu Broccoli group, it was introduced as a rotation crop around 1965. Following that, there was a period of decline with the onset of disease resulting from continuous cropping and the rise of imported broccoli. The Daisen area was a pioneer in Japan for shipping with leaves, and by displaying the place of origin, was successful in distinguishing it with imported products. “It is standard today to have broccoli with leaves and stalks attached, but Tottori was the first place this was sold in Japan” states Takami. “Daisen Broccoli is the name of broccoli cultivated at the foot of Mt. Daisen. It covers broccoli not only in Daisencho, but also in Yonago, Hiezu, and Hino. The foot of Mt. Daisen, as you are aware, has pitch black andosol, is extremely soft, and contains rich minerals with rich organic products. This is one of the secrets of creating delicious broccoli. Further, thanks to the altitude difference, it is possible to cultivate for the long period of 10 months per year, excluding the summer.” 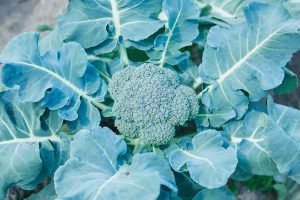 Daisen is the top producer even in Tottori prefecture, which has a strong reputation as a producer of such broccoli. In Daisencho, there is a young married couple in their 7th year of farming, who are cultivating broccoli. Hiroaki Sakata (33) and Chiaki (33). The Sakata fields are in Inamitsu, Daisencho, from which you can see Daisen and Komayama. The broccoli fields are 120R. Among the crops being raised by the Sakata’s, this is the largest field. 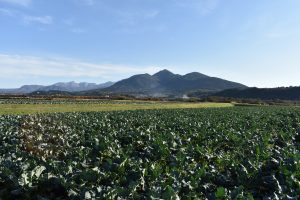 Hiroaki is from Nagasaki Prefecture. In his university days, he studied genetics in neighboring Matsue-shi, Shimane, but was interested in cultivating flowers, which he had liked from that time. He started working at a rose seedling company in Yamanashi Prefecture, but left after two years. After getting married, he took farming training at Chiaki’s home in Daisencho, aiming to become a farmer. During his days as a company employee, Hiroaki reflects that “I was an employee whose first thought was to communicate my own ideas to somebody, and have an impact on the business policy of the company.” After training, he became a farmer and states that he enjoyed thinking about how to run his business as a farmer.

“Normally, broccoli is greatly affected by the weather, so it is quite tough. In actual fact, in 2016 there were typhoons and heavy rain in the fall, and the following year, there was the spread of the infectious disease known as “purple spot disease”, causing cultivation quantity to fall, which was a shock”.
What roused Hiiroaki was a meeting he had with a chef from a French restaurant in Ashiyashi, Hyogo. As part of the prefectural branding in 2017, the sweetcorn cultivated by the Sakata’s had been used by this restaurant. “It started as an idea to use sweetcorn, but following that, he asked us to send any other good vegetables we had. Now, they are using not only broccoli, but a rich array of other vegetables, such as eggplant and cabbage.”
That chef gave his opinion of the vegetables made by the Sakata’s in a frank way. “We are sometimes told they don’t taste good. Have they been praised? Well…now and again”

What they were told by this professional who is strict about taste is that “even if the shape and color are good, vegetables need to have a flavor, or they are no good. We want you to make the best tasting vegetables possible”. The Sakata’s took the import of these words head on and made if their objective to create vegetables that would be praised by this chef. They said that they could not wait for the vegetables they had raised to be cooked into a delicious meal. Once they even requested the chef to send the food he had made to Daisen. “They sent broccoli baked risotto. Of course we the baking was done here, and it was just so delicious…delicious”, Chiaki says, with her eyes sparkling. It seems that Chiaki finds Daisen broccoli to be the best and is constantly thinking up recipes. She tells us that “my recommendation is broccoli fried rice. You first mince up the broccoli and it then becomes nice and crunchy in the fried rice. It is truly delicious”

Broccoli cultivation is really tough. So when I asked them why they continue with this crop which is so hard to cultivate, they both said “Broccoli, which represents Daisen, is an important crop that has been brought up by many people over a long period of time. It also played the vital role in acting as the trigger for us to become farmers. We will continue to raise delicious broccoli, and in the same way as we took on this role, the next generation will take on the role of producing Daisen broccoli from us. If we run into any problems, the senior farmers have a wide array of knowledge for helping us deal with this. We are really grateful to be able to learn from them. “ 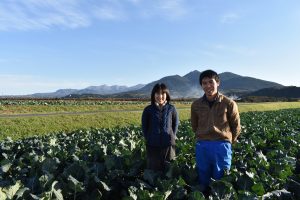 Broccoli that has received the blessing of Daisen. The senior farmers who have kept this going and the young farmers who will take on this mantle. The fields of delicious broccoli are bound to spread far and wide in Daisen.