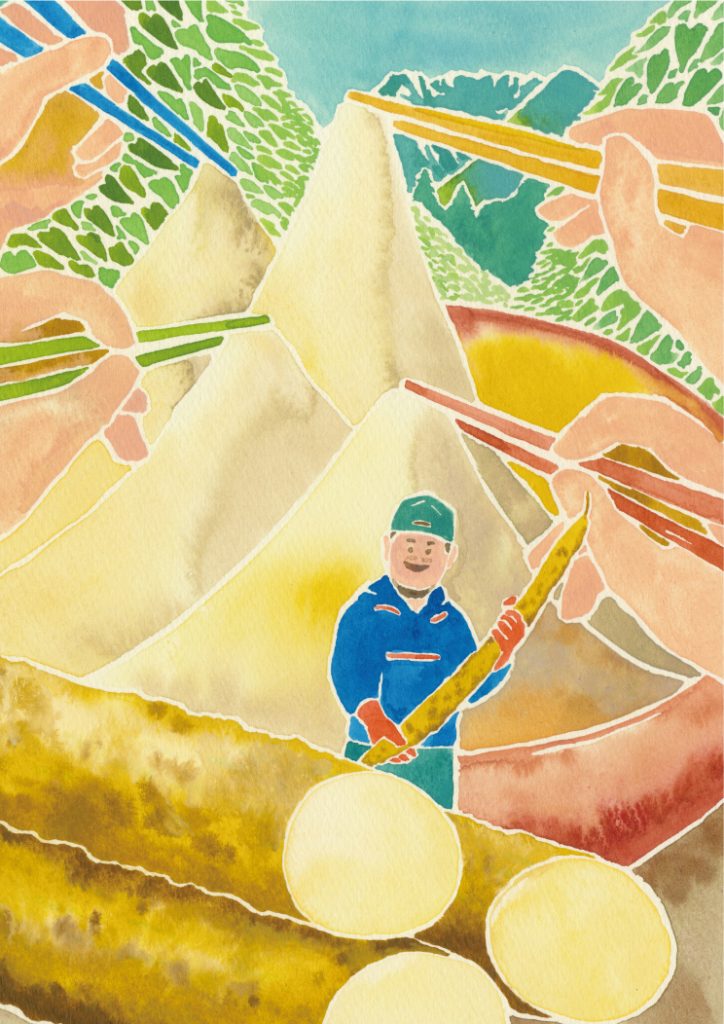 In Houkoku, located on the east side of Daisen-chou, is where Yutatsu Farm grows Jinenjo, or Japanese wild yam. The farm, known for its turf grass and pears, began cultivating wild yams about 4 years ago. They are currently one of the largest producers of wild yams in the Daisen area. 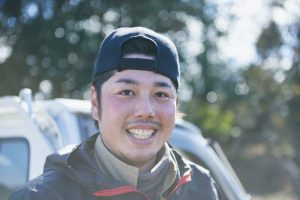 Takahiro Maeta (30 years old), who works at the farm, was an office worker in Osaka until 3 years ago. He came back to Nakayama, DaisenDaisen“But the owner didn’t give up. He tried to persuade me, stating that the trend was heading toward agriculture. He even told me that he considered me as the potential successor of the farm. Though I was not interested in the offer at first, I began to understand how serious he was,” Maeta said with laughter. Just like that, he jumped into the agriculture business with no knowledge or experience at all.

His first task was the growing of wild yams, which the farm started only a year ago. Maeta, who “couldn’t tell the difference between Yamaimo and Jinenjo (different kinds of Japanese yam),” got attracted to the world of wild yams soon. Cultivation of wild yams requires hard work throughout the year. In March, seed yams will be made from the wild yams from the previous year. Sprouting takes place in the plastic greenhouse, which would be planted one by one when the cherry blossoms start to bloom. The planting process already sounds like a hard task, but Maeta continues, “It’s the preparation for the planting that’s even tougher.”

“In winter, we have to plant the corrugated plates into the land. This work is more than anyone can imagine…” As I asked, “Plates, why the plates?” Maeta explained, “In order for the wild yams to grow straight without getting hurt, we lay the plates under the land where we plant the seeds. We then place some non-nutritive soil on top, and cover the area with vinyl. This is to protect the products from unnecessary moisture and nutrients.” All seeds must be planted after such work, because they tend to refuse water and fertilizers, thus, bend or get spoiled. Yamaguchi Prefecture’s Jinenjo Association came to Daisen-chou to provide a direct guidance of this method. “We had very little information, as not many farms in Daisen cultivated wild yams. Our company was new to the production as well, so we had to be taught from the basics.” 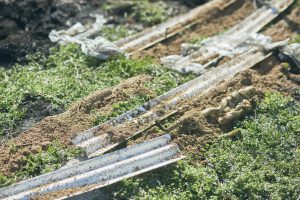 These are the corrugated plates. Around 1000 plates are needed each season, to cover half of the seed yams to be planted.

Maeta’s hard efforts extend to selection of appropriate soil. He was instructed to use decomposed granite on top of the plates, but Maeta “wanted try different kinds of soil, and once used river sand. I was surprised when the yams turned out white, like the sand.” He seemed to be excited about trying out various ideas of his own and those from fellow farmers, and discovering new methods. 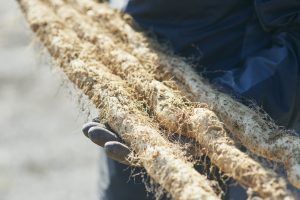 The wild yams grow straight, and they treat these with much care. 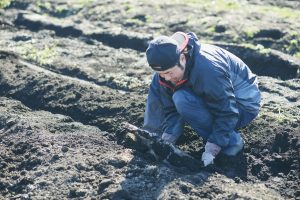 Maeta often does all the work alone. For that, he would “sometimes talk to the yams. Like if I see a crooked yam, I would tell them ‘why did you grow up like that!’ and so on.”

I asked what he enjoyed the most about cultivating wild yams. Maeta answered, “The other day, Megumi no Sato, where they sell our yams, called us. They said that some of their customers who had bought our yams last year asked when they could get some this year. I was so pleased to hear that.” As the producer, there are very little opportunities for Maeta to hear comments from the consumers. His goal for this year is to “make people happy with the wild yams. Producing wild yams isn’t just about growing large and beautiful yams, but they need to satisfy the people that eat them.” He also told us that he dreams to one day open a Jinenjo Market, where he can connect with his customers, and that someday he would make Jinenjo the best local specialty of Daisen, above broccolis and pears. Please try the Jinenjo yams and feel Maeta’s passion!