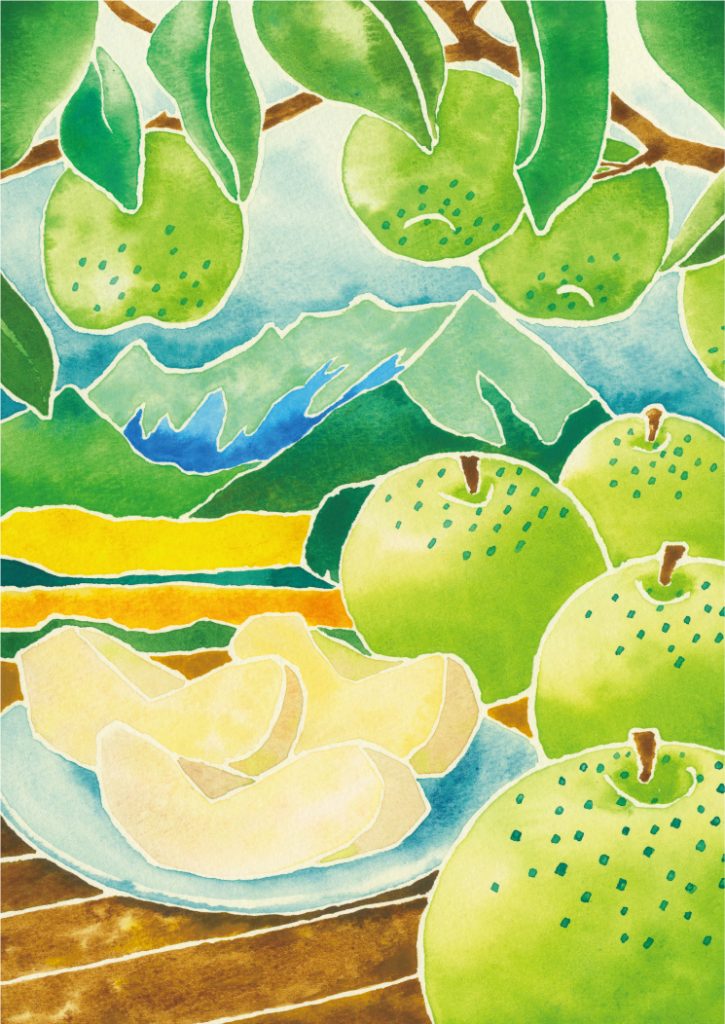 In Daisen, there is a legend. The legend tells a story like this. 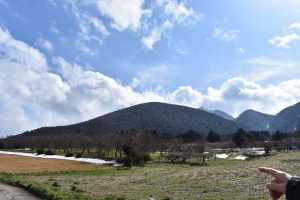 This big mountain that they saw is the famous Daisen, and this mountain said to have been left behind is Koureisan, a mountain that is 751.4 meters high. Koureisan is at the foot of Daisen and is an area leading in the production of nashi pears in Daisen city. There is a man who has been growing nashi pears in this area for around 40 years. His name is Hidekatsu Ueda, a 73-year-old man.

Hidekatsu is the 3rd generation in his family to be a nashi pear farmer. At 23, he arrived to Nagata in Daisen city from the neighbouring coastal city of Yodoe as he married into the family of his wife. He said that he had done some fisherman work because Yodoe was a coastal city, but he had never done any farm work. He laughed and continued on to say that he knew he would need to work on the farm because he was marrying the daughter of a farmer though. Their third child was born when he was 36 years old, and at the same time, he quit working as a salaryman to become a farmer. He reflected back to this time and said that he had no knowledge or experience at that time.

The Ueda family have been growing nashi pears for around 70 years, but at the beginning, their main produce was tobacco leaves. As times changed, they started to put more effort into the cultivation of nashi pears, and now, nashi pears are the main produce. Hidekatsu stated that both his parents-in-law did not know much about nashi pears, so there was no one around that could teach him. While he said this, his wife Sachie agreed and said that they did not know any specialised knowledge but Hidekatsu’s understanding as he learnt was very quick. They explained that they bought and read many books to study and learn about growing nashi pears. 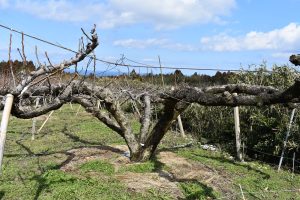 For the first 10 years of growing nashi pears, times were tough. At the time, the association in the area had a slogan that said ‘let’s make sweet nashi pears’. Hidekatsu heard that in order for nashi pears to be sweet, they needed a lot of sunlight, so he said he cut many branches to allow more sun, but ended up cutting too much and damaging the tree. Because he excessively trimmed the branches, they experienced issues for the few years that followed and felt very disappointed and regretful. However, as Sachie said, Hidekatsu was extremely quick at learning, so his ability to grow nashi pears rapidly improved. Hidekatsu looked back and said that experience is everything. He went onto say that mistakes are not forgiven when growing permanent crop, but balance is the most important factor.

The keyword Hidekatsu keeps in mind when growing nashi pears is ‘balance’. There is a balance that is right for every individual tree. You can’t give it too much fertiliser and can’t disinfect it too much. He also said that you can’t repeat the same thing every year either. Hidekatsu aims to use less chemicals, so he does not disinfect them when he feels it is not necessary. He sternly stated that you can’t just follow the data as well. Growing nashi pears is an all-year-round job. It starts in winter when they select the crop. In spring, they breed, and after that, bags need to be placed over the trees and grass need to be cut, so there are many things to do all year round until the fruit can be picked. Therefore, there is no time to rest for Hidekatsu. In the morning before breakfast, he climbs the mountain where the nashi pear farm is to see how they are doing. After eating, he will talk about nashi pears until dark. Perhaps there is a ‘balance’ that only Hidekatsu understands because he has been living this way for many decades. 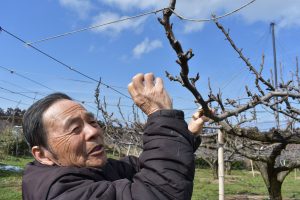 When Hidekatsu talks about nashi pears, it always seems like he’s having fun

When he was younger, it was difficult for him to make nice nashi pears. Because of this, he often felt disappointed. This disappointment made him strongly feel that he wants to make delicious nashi pears and wow everyone. These strong feelings lead to his passion for nashi pears and allowed him to work hard every day. He explained that nashi pear trees and people are the same. The heart is important for people because if the heart isn’t healthy, then neither are the people. He explained that for nashi pears, the root of the tree is their heart. He said that unless the root is healthy, the fruit will not grow. The delicious nashi pears are grown by Hidekatsu’s warm and passionate heart. The process of growing nashi pears will begin again this year.

【Here you can buy】