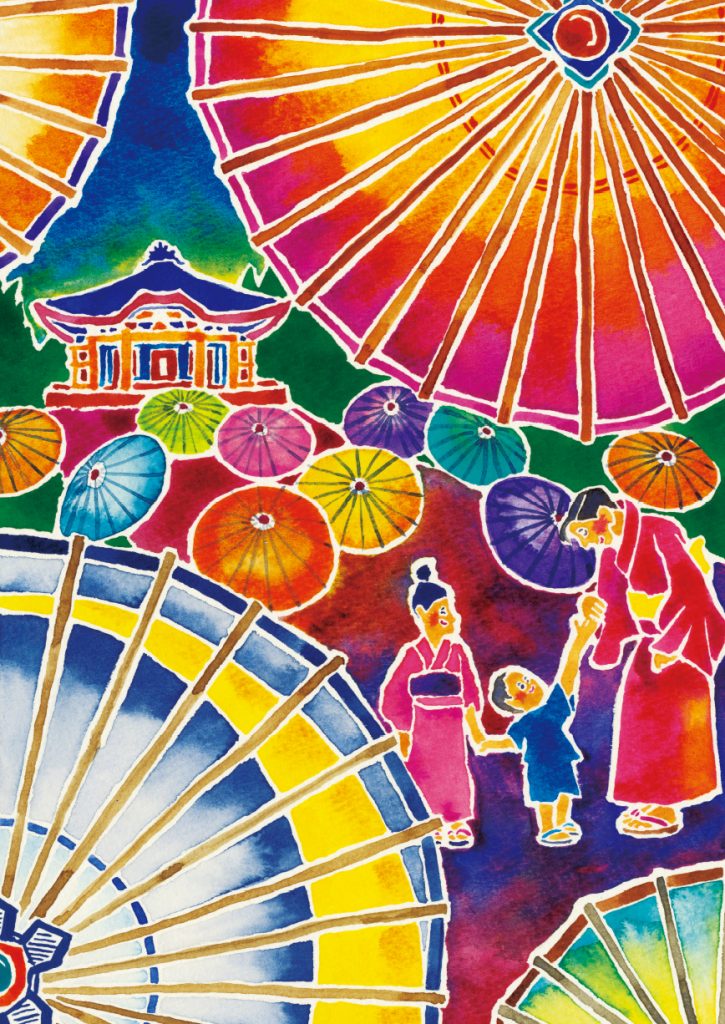 “Obon-no-daikento” is one of the summer traditions of the Daisen-ji temple area. It attracts crowds every year of tourists, in addition to the many tourists living in the Daisen area.

These Japanese umbrellas are being made by Arisa Hasegawa of the “Japanese umbrella workshop – Hatsune” in Yodoecho, at the base of the mountain. Arisa hails from Hyogo Prefecture. Around 10 years ago, her family moved to Yodoecho, her father’s hometown, and Arisa who was living in Tokyo at the time, said that she “somehow or other” also moved to Yodoecho. Until then, she had worked as a patissier and chef in Tokyo, which was “a lifestyle far removed from that of traditional crafts”.

Yodoecho had the traditional crafts known as “Yodoe umbrellas”, and she happened to hear that the “Yodoe umbrella tradition museum” near her home was looking for a successor. Since coming to Yodoecho, “I had been dithering around, with nothing particular that I wanted to do”, Arisa laughed. Based on the recommendations of those around her, she casually visited the tradition museum, and saw a vast array of Japanese umbrellas the like of which she had never seen before. So that was it! When I asked her whether, on seeing them, she instantly decided to make them herself, Arisa laughed again, saying “No, not at all…”. However, she found it interesting and so first decided to study at the “Furusato” crafts department of a vocational training school. Arisa was the only one in the “Furusato” crafts department specializing in Japanese umbrellas. It was hard to receive instruction on Japanese umbrellas, and difficult to learn about them in detail. During that time, the Chairman of the tradition museum, who Arisa looked up to as a mentor, passed away suddenly and Arisa’s path toward Japanese umbrella making became ever more difficult. At this point, “I prepared myself for the worst, knowing that if I was to make Japanese umbrellas I would need to do it myself”, said Arisa. 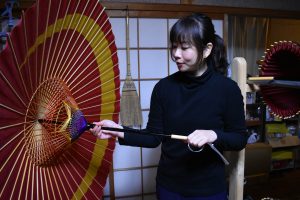 She disassembled existing old Japanese umbrellas and those currently produced in other regions, and steadily learned the method of making Japanese umbrellas. She just went for it the first year, saying “you have to make a living doing this, my mentor had told me during his lifetime. I was the only person who could realize my dream of revitalizing Yodoe umbrellas”. After that, she went independent. “When I say independent, I still did not possess any technology, or even have any supplier for the parts and materials I would require for the Japanese umbrellas”.
It took another two years for the ““Japanese umbrella workshop – Hatsune” to get into full swing. Going by herself into a bamboo forest, she cut the bamboo, split the bamboo with a machete and thus procured the materials that would make up the frame of the Japanese umbrella. Additionally, in the case of parts such as the “rokuro” that are essential for Japanese umbrellas, she went by herself to different wholesalers to negotiate their supply, and it seems that this was a struggle. It was really tough. “Well, what I mean is…somehow I was able to make umbrellas…”, she said in a calm tone.

When Arisa first started making Japanese umbrellas in Yodoecho, she did not have any friends or acquaintances there. She laughs, saying, “thinking back now I wonder why I ever started it”.

After that, Arisa joined the group of creators and artists in Sanin, known as “Sanin Sacca”, and her activities gradually became more focused. At that time, an acquaintance contacted her about the “Daikento” he was directing, and the Daikento that had, until that point only had picture lanterns, was now lit up with Arisa’s Japanese umbrellas as well. “In the first year, I used the Japanese umbrellas I had made myself for the illumination. However, the weather was poor, and nearly all of them were destroyed”, she says, reflecting on that time. From the second year, she started to create the current Japanese umbrellas, known as the “Daisen umbrellas”, based on the postcard collection, known as the “thousand views of Sanin”. 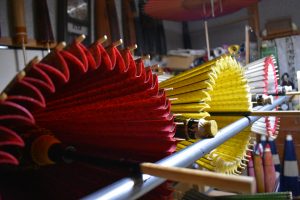 “These postcards captured the beautiful scenery of the Sanin areas, and I was truly moved the first time I saw them. There were many photos of the Daisen area, and many of my designs were inspired from these.”
The various faces of the various seasons of Daisen. Arisa, based on the photo collection, visits the Daisen area to see, with her own eyes, what kind of scenes can be seen. Daisen umbrellas in various colors have been produced from there. There is the summer tradition, but the designs of the Japanese umbrellas depicting nature and culture around Daisen in the various seasons enable you to see Daisen throughout the year. 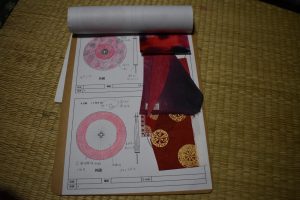