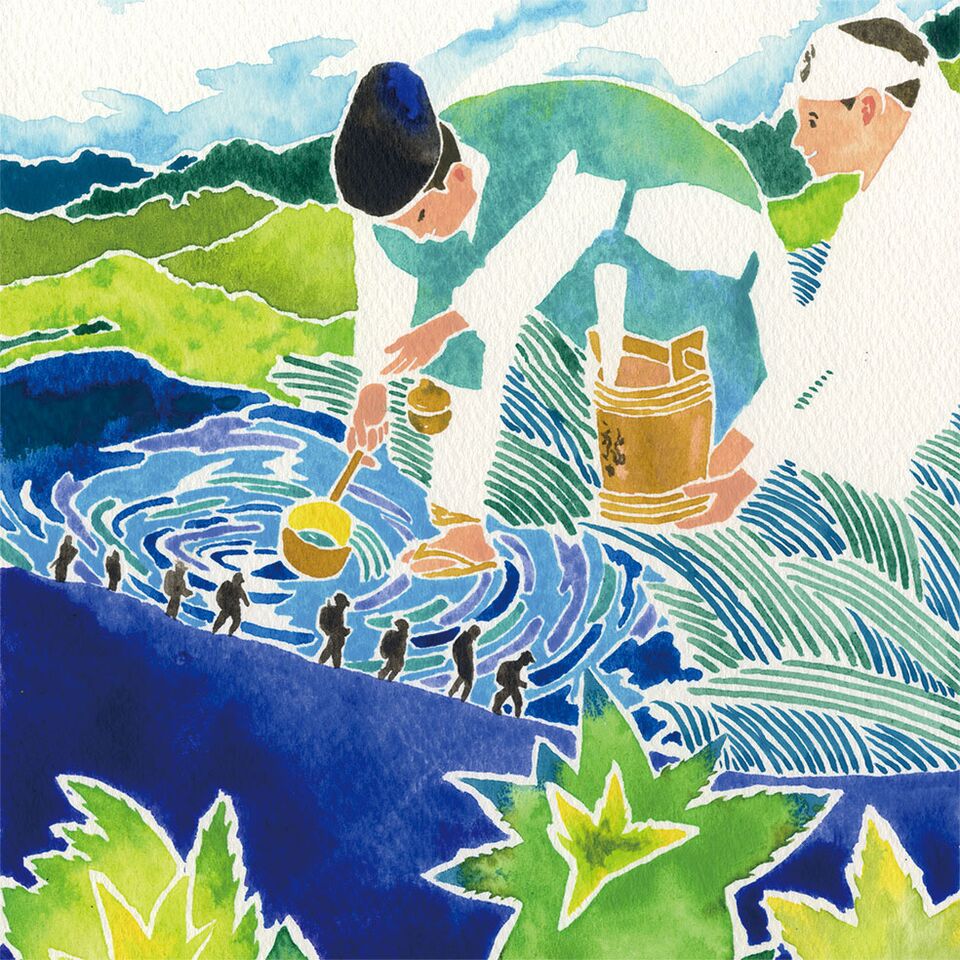 Mohitori Shinji has over 1,000 years of history and is held every year on July 14th and 15th. It is designated as an intangible folk culture asset.

In the evening of July 14th, people gather at Ogamiyama Shrine Okumiya for a purification ceremony.

At 1:30 am the following day, a prayer for safety is offered for a group climbing Mt. Daisen for the ritual. Group members consist of two priests, two leaders and some luggage carriers carrying a wooden pail, sickles and food. The prayer is given to further purify the members before they approach their god. A Shinto priest sprinkles hot water using bamboo leaves.

After the safety prayer, the group leaves the shrine and begins climbing the mountain.

Members take Gyojadani (ascetic valley) Trail and reach a stone chamber at the mountain top before dawn. The head priest and second priest enter the chamber, offer rice cake and Sake wine and hold a ritual. Other members offer branches of a sacred tree.

Members then ring a bell in front of a lake called “Bonjiga ike” and chant Norito prayers to their god. They pour Sake they carried in a wooden pail into the lake, and fill the bucket with sacred lake water.

After that, they pick medicinal herbs and bring them back to the shrine with the sacred water. The herbs and water are offered to the god at the shrine and another ceremony is held to welcome the members. After the ceremony, people enjoy a party with some food and drinks that they had brought. This is allowed only once a year for this occasion. The sacred water and herbs are given to the attendees after the party.

The herb they brought from the mountain is a kind of Yomogi mugwort. In the past, different kinds of herbs, which were said to be good for canker sores, gynecological ailments and diseases of cows and horses, were also picked. Even now, Yomogi mugwort is believed to be good for any diseases and people have a custom of keeping dried Yomogi and taking it when they get sick.

Mohitori Shinji used to be called “Misen Zenjo Training” and performed by Daisenji Temple. For monks, climbing Mt. Daisen was a life threatening ascetic training which they could carry out only once in a lifetime. After Buddhism and Shintoism were forcibly separated during the Meiji Restoration, this ritual was taken over by Ogamiyama Shrine Okumiya. It is one of the very important events that helps preserve the local ancient religion to this day in the Daisen region.